Your Donation to FDRD will make a difference!

NATURALIST: AN EXPERT OF NATURAL HISTORY

The Dillon Ranger District, in the White River National Forest is encompassed by many abundant habitats, sustaining the populations of our local flora and fauna. Learn about the wildlife that calls Summit County home, the wildflowers that paint the hillsides during the summer months, the trees that make up our bountiful forests, and the eco-systems and habitats that you will find here in the beautiful Dillon Ranger District. 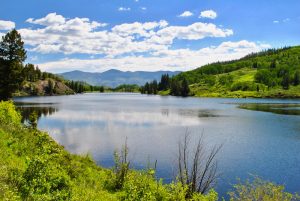 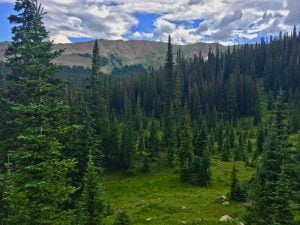 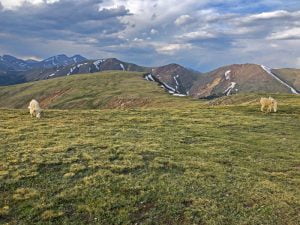 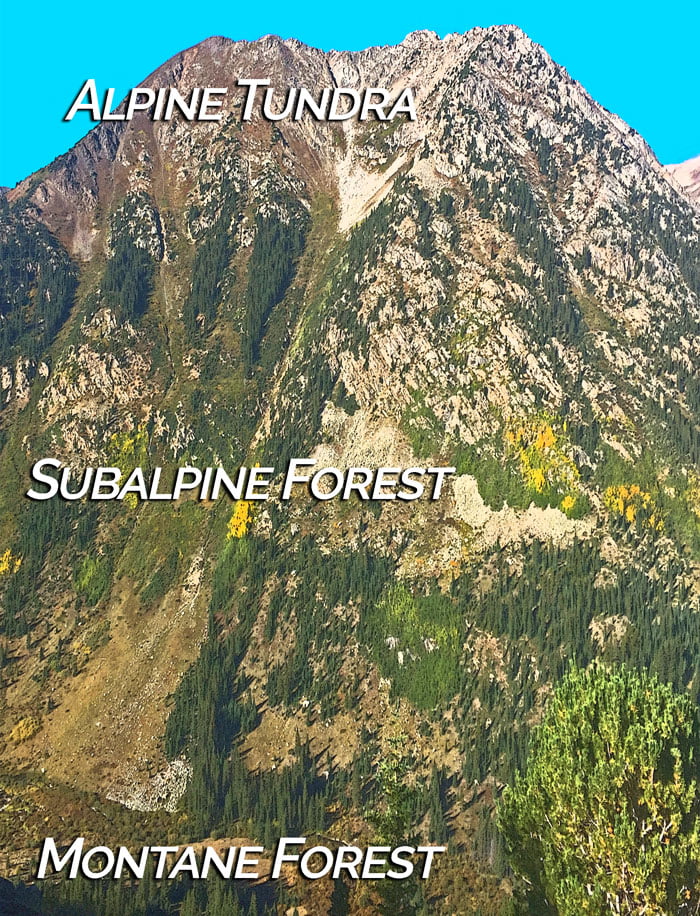 Name means “twig eater” in the Algonquin language. Found in wetland willows and the forest. They can be aggressive if threatened.

In winter found in mountain valleys; in summer near timberline. Fall mating call is a distinctive “bugle.” Listen to Elk Bugle

Gray in color, known for large “mule size” ears. In winter found in mountain valleys and in summer, forest wide.

All Colorado bears are “Black Bears,” yet colors range from black and brown to cinnamon. Take precautions with food/ garbage in bear country.

Cat with gray to brown spotted coat and black-tufted ears. Can be mistaken for lynx, but have shorter legs and smaller paws.

Small canine, usually reddish in color, some can be grey/black. Has long, bushy tail with white tip. Unafraid of humans.

Forest dweller. Changes color with the season: brown in summer, white in winter. Can run up to 32 mph.

Small relative of the rabbit, lives in talus slopes at or above timberline. Gathers flowers and grasses all summer for its winter food supply.

National emblem of the United States. Usually found near large bodies of water.

Nests near any body of water, almost exclusively eats fish.

Known for speed, can reach up to 200mph when diving. Eats primarily medium-sized birds.

Males are a brighter blue than females

Has rusty patches near the rear

Nest is made out of lichen and spiderwebs

Please remember to stay on the trail, leash your dog, keep your distance, and do not litter or feed.  Colorado Parks & Wildlife encourages you to watch and enjoy YOUR wildlife, but do it responsibly, and from a distance!

Needles are soft and flat. Cones are black/purple and long. Firs have a silvery smooth bark when they are small.

Needles grow in twisted clusters of two. Cones are closed and must be exposed to extreme temperatures (i.e. wildfire,) in order to open and spread seeds. Most here have been affected by pine beetles. Red needles indicate dead or dying trees.

The recent Mountain Pine Beetle epidemic, responsible for killing millions of lodgepole and ponderosa pine trees from New Mexico to Alaska, is now in decline. In the wake of the Mountain Pine Beetle outbreak, we can play a role by encouraging the diversity in tree species and ages necessary for overall forest health by actively managing our public and private lands. Some forests may grow back with more natural diversity than exists today, and others may regenerate back to single-aged lodgepole pines.

Visitors to our area will likely notice sections of the forest in which dead trees have been removed. These range from corridors cleared alongside trails, roads, and power lines, to multiple acres of clear cuts near our communities. These areas have been treated to reduce the risks posed to humans, our infrastructure, and our water supply by removing trees and buildup of native fuels. These areas are monitored for regeneration and replanted if necessary. As the young forest continues to develop, the U.S. Forest Service and other public land managers can actively encourage diversity away from a single species of pine trees. In other cases it will monitor, gather information, and practice adaptive management to avoid the situation seen today.

There are several hundreds of species of wildflowers in Summit County, and this list is a small sample of our favorites. If you are interested in purchasing a wildflower identification book or guide, FDRD has the below titles for sale, in our store located at the Dillon Ranger District Station Visitor Center. (680 Blue River Parkway, Silverthorne) 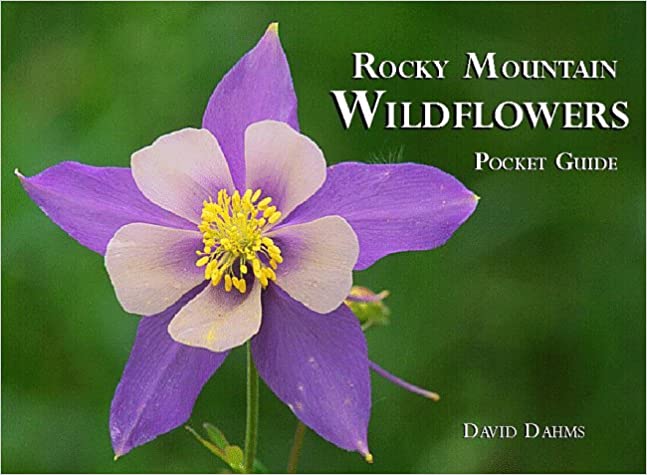 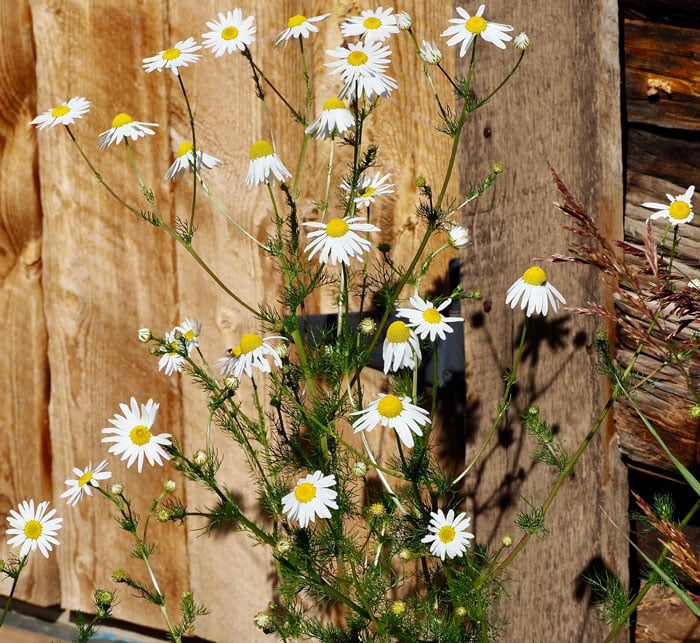 Removal: pull plants from the base of the stem, which come up easily. Bag and destroy plants, especially seed heads. 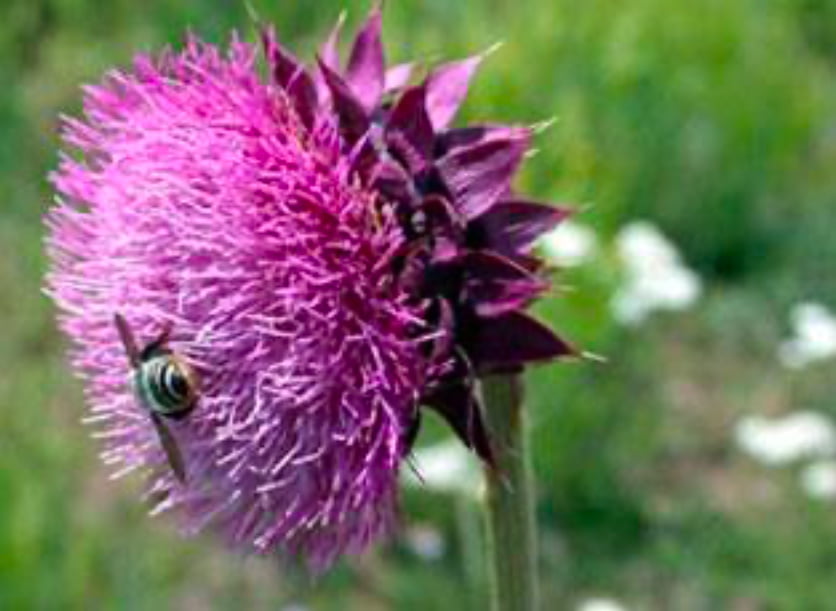 Biennials: Second year Musk Thistle plant bolts and at the stalk end will be a large, red bloom, first year plant is a flat rosette only. Other biennials are bull and plume, both with red heads.

Removal: Do not pull mature plants out of the ground as it will only encourage root spread. Use a commercial weed killer sprayed at the base of the plant. Cut off the flower head and bag so that the seeds do not spread. Small plants may be pulled and destroyed. 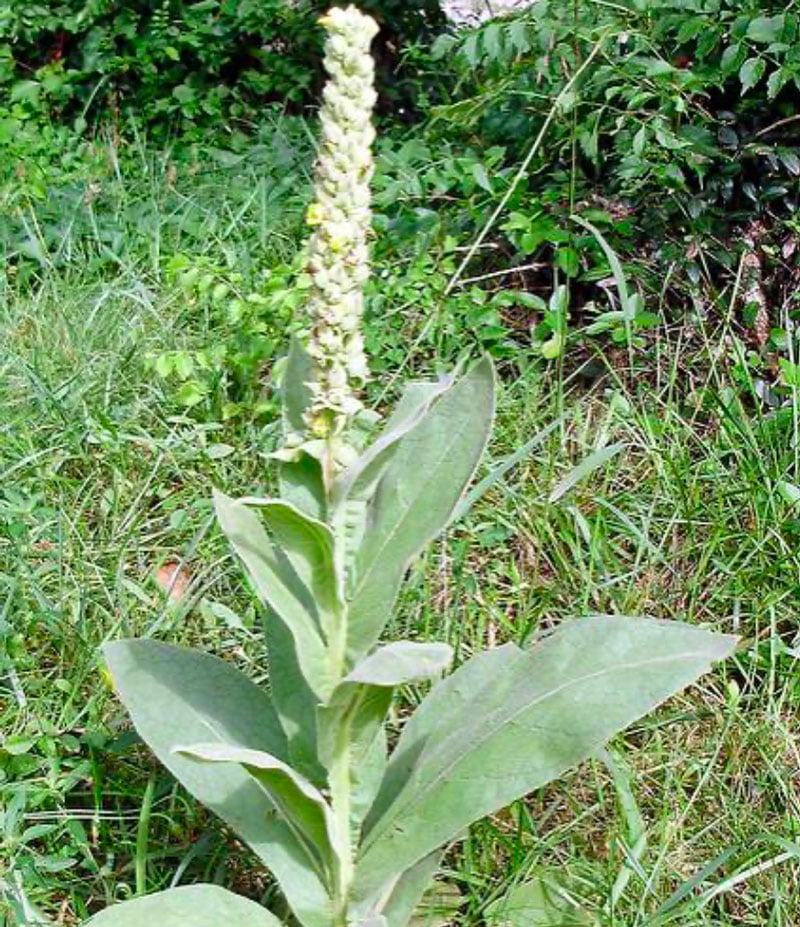 Tall biennial plant that can grow to 10 feet with small yellow flowers and soft fuzzy leaves. One plant can have up to 100,000 seeds that can last up to 100 years.

Removal: Dig up plant or use commercial weed killer

Also known as “camper’s friend” for the soft leaves

This should not be confused with the native Green Gentian Monument Plant that is also extremely tall with whitish four petal flowers and long narrow leaves. 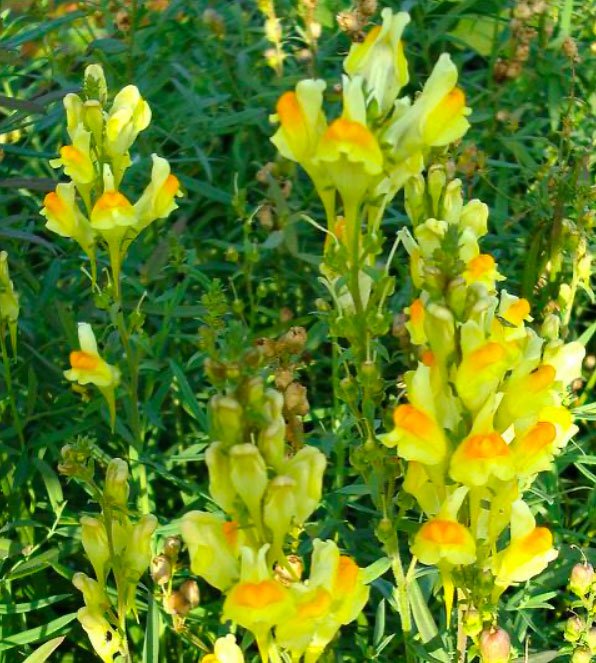 Removal: pull and destroy. May take repeated efforts to eradicate.

This wild snapdragon is a troublesome and aggressive weed. 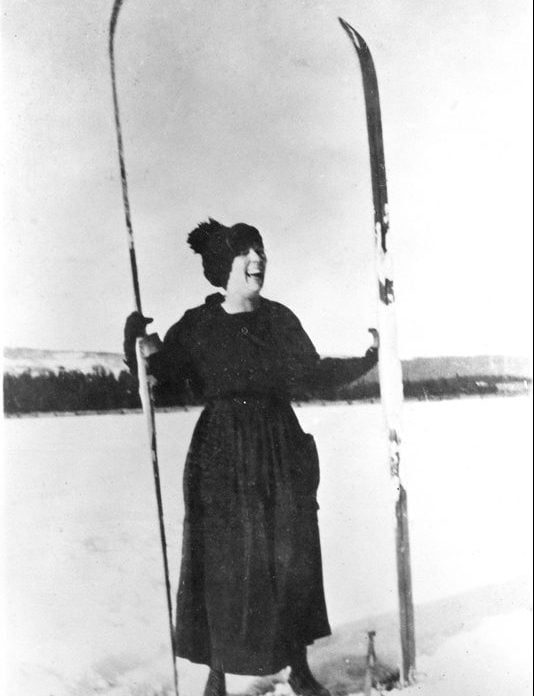 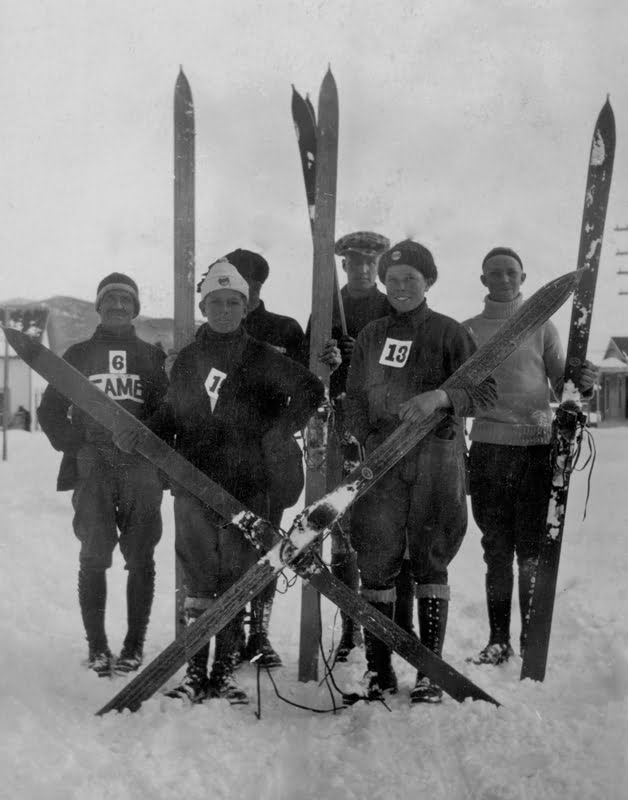 For over 100 years, these mountains heard the drilling, blasting, and shoveling of miners searching for gold and silver. In recent years, these sounds have been replaced by the “swish” of ski against snow and the loud sounds of snowmobile enthusiasts roaring through the forests. The most recent history of Summit County is all about the era of “white gold.”

While the beginnings of modern skiing can be traced to Summit’s early days, skiing was almost entirely for transportation during the Pikes Peak gold rush in the 1860s. The equipment differed significantly from that seen on today’s ski slopes. In fact, early skis, which were actually called snowshoes, were made of wood and measured 10 to 12 feet in length. The skier steered and stopped with a single wood pole dragged behind him. Local preacher Father Dyer probably best exemplified this type of ski transportation. He skied between early gold mining camps during the winter to deliver mail and to preach sermons.

Photographs and accounts of the late 19th and the early 20th centuries indicate that similar equipment was used not only for transportation but for recreation and perhaps even competition. It appears that much of the early recreational skiing resembled today’s cross-country or Nordic skiing.

In 1910, a Norwegian named Peter Prestrud, who lived in Frisco, introduced what became a popular local sport – ski jumping. It became so popular that just after WWI, residents constructed ski jumps near old Dillon, Breckenridge, and elsewhere. In 1919, Anders Haugen, a famous Norwegian skier, jumped to a world record of 213 feet at the Dillon jump located near the present-day Glory Hole/overflow outlet of the Dillon Dam. The following year he broke his own record with a jump of 214 feet.

In the years leading up to the 1960s, Summit County saw a great deal of recreational skiing in which women wearing long dresses and men enjoyed outings using long wooden skis. A number of privately owned ski areas opened to the public for downhill skiing in this period as well. In the mid-1930s, the Hoosier Pass ski area opened and probably hosted skiers until the early 1940s. Two parallel cleared runs can still be seen to the left of Route 9 when ascending Hoosier Pass. One of the original four log cabins still stands within view of the old runs.

Chalk Mountain, located at the top of Fremont Pass, between Copper Mountain and Leadville, and directly across the road from the present-day Climax Mine, opened in 1934- 35. Built by Climax Mine employees and used mainly by them, the area also welcomed the public before closing around 1962.

Arapahoe Basin Ski Area, located on Route 6 below and just west of Loveland Pass, was developed by 10th Mountain Division veterans and locally famous, Max and Edna Dercum. It opened to the public in 1946 and is, of course, alive and well today and very much a part of modern-day Summit County skiing.

But the real story of modern skiing in the county began in about 1959 when Wichita, Kansas-based Rounds and Porter Lumber Company (RPLC) became interested in acquiring land in Summit County to build a year-round, second-home recreational community. RPLC was not only a purveyor of lumber products but also a real estate developer and oil and gas explorer. The Dillon Reservoir, under development at the time, and the magnificent snow-covered mountains surrounding Breckenridge attracted the company for their winter and summer recreation potential.

Exploration geologist Bill Stark was an acquaintance of RPLC executive Bill Rounds, and a skiing enthusiast. Stark approached Rounds with the thought that the mountains around Breckenridge offered the potential for winter activities to compliment the summer, water-based recreation activities at Lake Dillon. Rounds, when skiing in Aspen in 1959-60, recruited the services of two Norwegian ski instructors to help evaluate the potential of Breckenridge. And, as the saying goes, the rest is history.

In 1960, the company submitted an application to the U.S. Forest Service for a permit to build a ski area on Peaks 8, 9, and 10. The Forest Service completed its evaluation in March 1961, and granted a permit on July 27, 1961, for 1,764 acres. Trail cutting on Peak 8 began immediately. The “Peak 8 Ski Area,” its original name, opened for business on December 16, 1961. Depending upon who you ask and what you consider a “run,” either six or seven original runs (Springmeier, Rounders, Swinger, Crescendo, Four O’Clock, Boreas Bounce, and Ego Lane) awaited skiers at the new area.

Over the years, crews cut many more trails and built more lifts on Peak 8. Peaks 9, 10, 7, and 6 opened in subsequent years in that order. The Bergenhof Restaurant on Peak 8 served its first customers during the 1961-1962 season, while the Vista Haus began operating during the 1997-1998 season on Peak 8. Peak 9, originally named Royal Tiger Mountain, opened in 1971- 1972 with a restaurant, originally named the Eagle’s Roost and subsequently re-named the Peak 9 Restaurant and The Overlook, first providing meals during the 1973-1974 season. 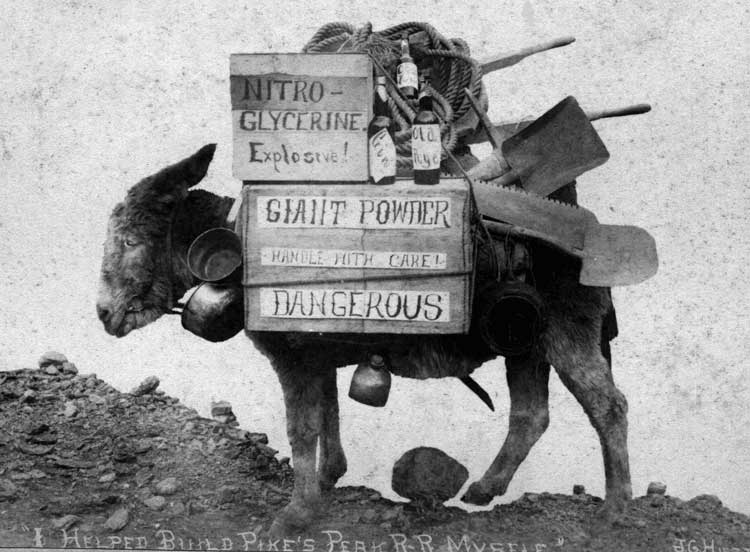 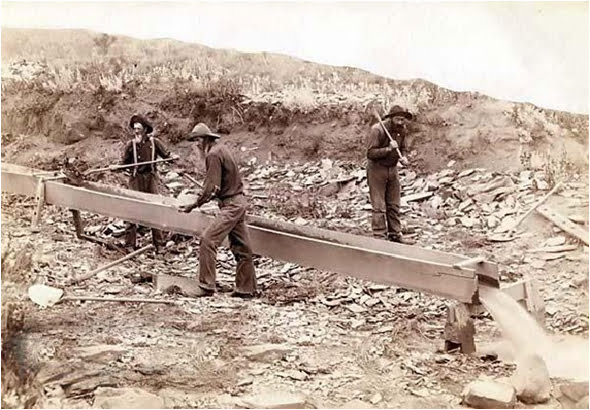 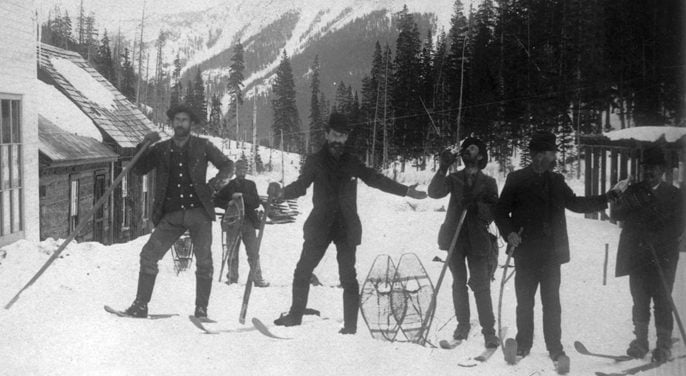 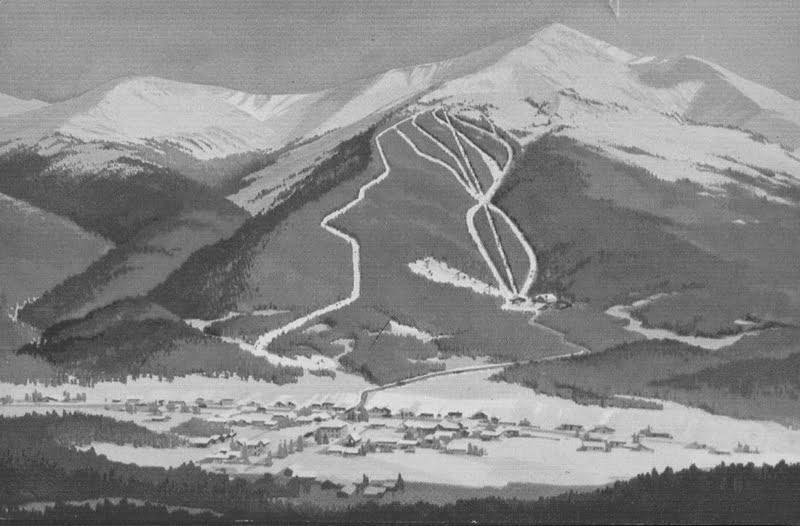 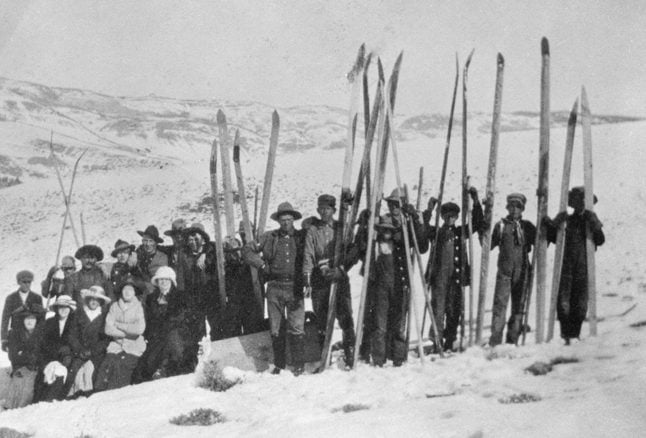